As The Euro Elections Loom, Let’s Remember The Coronation Of Our Last Anglo-Saxon King 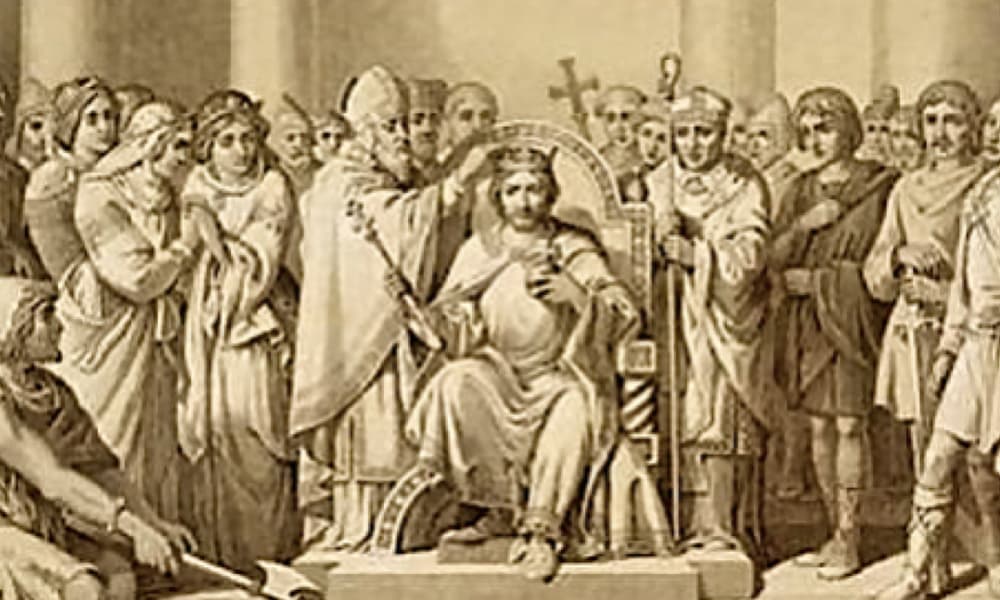 With crucial European elections approaching, this is a good time to think about Britain’s historical ties with the people of Europe.

On this day in 1066, the 6th of January, one of England’s most famous kings was crowned. Yet, within a year, the England he knew was smashed and gone for ever.

King Harold II was born in 1022 in Ængla Land: the land of the Angles. The language he learned at his mother’s knee was Ænglisc. Today we’d call it Anglo-Saxon or Old English.

The ruling class buzzing around Harold’s royal court were of Germanic descent – Angles, Saxons, Jutes, and Frisians. These groups had started migrating to England in the AD 400s during the dying days of Roman rule. Although the Germanic settlers had at first been invited in to protect against raiders, their presence eventually turned into a full-blown conquest, with the native Britons being pushed into the Welsh Marches, Devon, and Cornwall. It was the age of Celtic resistance – the age of Arthur.

The influx of Germanic tribes was the second wave of conquest the native Celts had suffered. Five hundred years earlier, the Italian-led Roman military had, in several phases, subjugated the Britons. Although Roman rule was distant and lay on top of Celtic culture rather than obliterating it, the cosmopolitan nature of the Roman Empire drew merchants, soldiers, and citizens from far afield, many of whom settled permanently in England.

Yet Anglo-Saxon rule did not ensure peace, as had originally been hoped. Before long, the Vikings started successfully seizing large chunks of central, northern, and eastern Britain, embedding yet another culture into these islands, and bringing fluctuating ties with the powerful royal houses of Scandinavia.

So, as the 42-year-old Earl Harold of Wessex ascended the throne in 1066, his kingdom was culturally diverse and complex.

Despite the thrill and promise of his coronation — the first ever to be conducted in the brand-spanking-new Westminster Abbey, where the paint was barely dry — Harold’s reign was a disaster for Anglo-Saxon England.

The Royal Family’s official website describes Harold II as “an outstanding commander”, which he undoubtedly was. But the repeated assaults on his kingdom from the Vikings and Normans proved too much.

By mid-October that year he was dead (with or without an arrow in his eye, who knows), and Britain was rocked by another conquest as the crown fell into the hands of a foreign warlord — William “the bastard” of Normandy. (He was touchy about being born out of wedlock, therefore non-Norman medieval chroniclers referred to it frequently.)

William and his nobles did not see themselves as conquerors. They maintained that St Edward the Confessor and Harold II had both promised William the throne. Whatever the truth, the nobles William brought with him had no desire to work with the existing people or structures. They ripped it all up, seizing virtually all the land, imposing a new system of military government, culture, and law.

Out of interest, given our nation’s famous lack of skill with languages: in 1066 England became a trilingual country. The rulers communicated in Norman-French (eventually Anglo-Norman) and Latin. The English continued to read and write in Anglo-Saxon, which gradually morphed into the Middle English of Wycliffe, Langland and Chaucer. Vast numbers of French words crossed the divide, and became embedded into English. Yet, even today, there are some standout survivals of Anglo-Saxon, most notably the days of the week – still redolent of early Germanic paganism after so many centuries: Tiw’s day (god of war and sky), Woden’s day (the supreme deity, god of victory and the dead), Thunor’s day (god of thunder), and Frigga’s day (Woden’s wife, goddess of love and the hearth).

So, as we contemplate where we stand vis-à-vis modern Europe in the 21st century, it is worth remembering that sewn into the fabric of modern Britain, into the heart of what we recognise as Britishness, there is the legacy of historic peoples who occupied the lands we now call Italy, Germany, Scandinavia, and France, and there are tangible contributions they each made to the unique cultural identity of these islands.

The economic and social case for Britain’s participation in the EU is about the future, not the past, and it must be judged in modern terms.

But any argument against Britain’s participation based on the premise that Britain or its inhabitants are somehow uniquely set apart from the people of the European mainland is simply wrong.

Two millennia of European invasions have made Britain, genetically, culturally, and linguistically, one of the most European countries on the map.